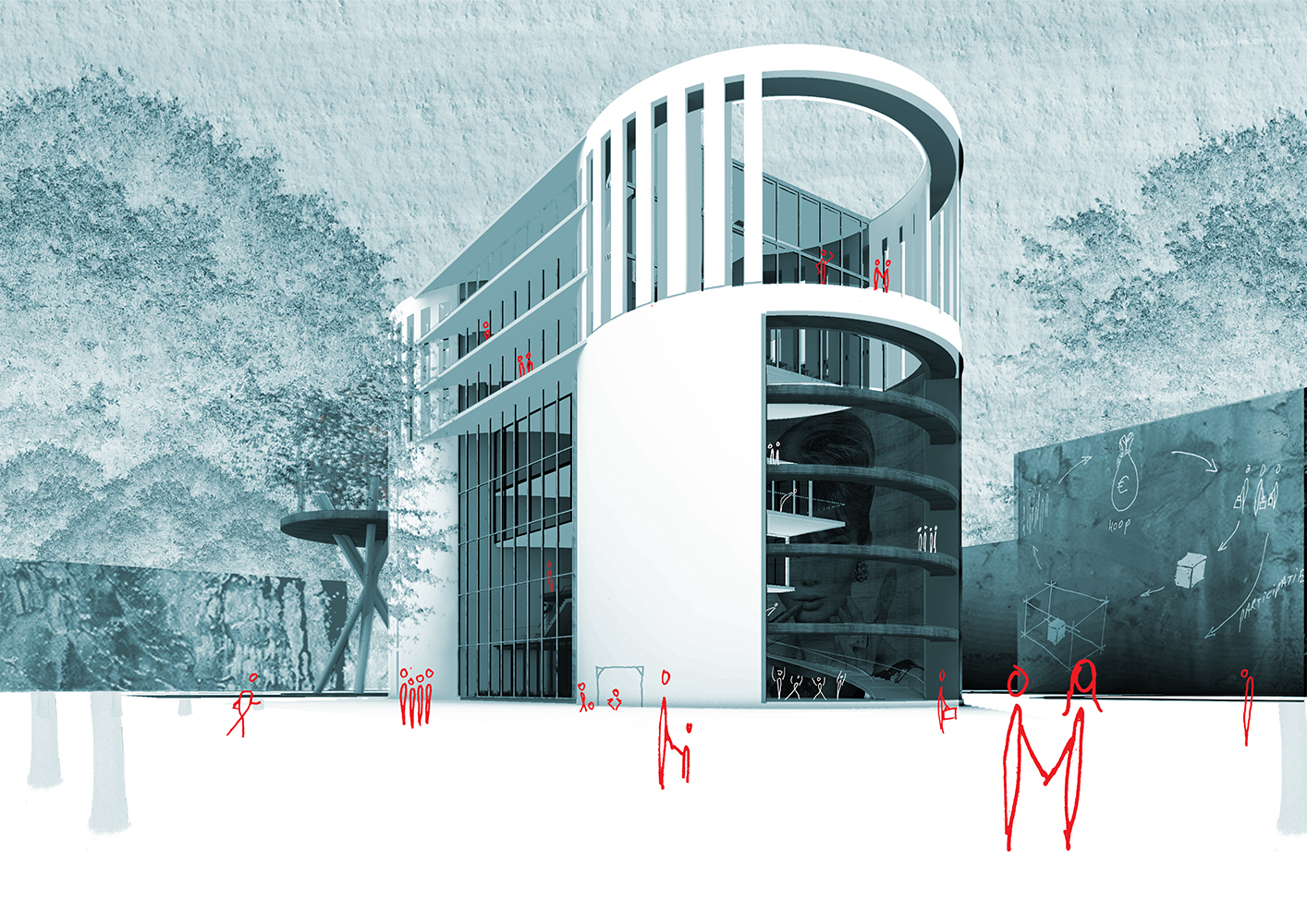 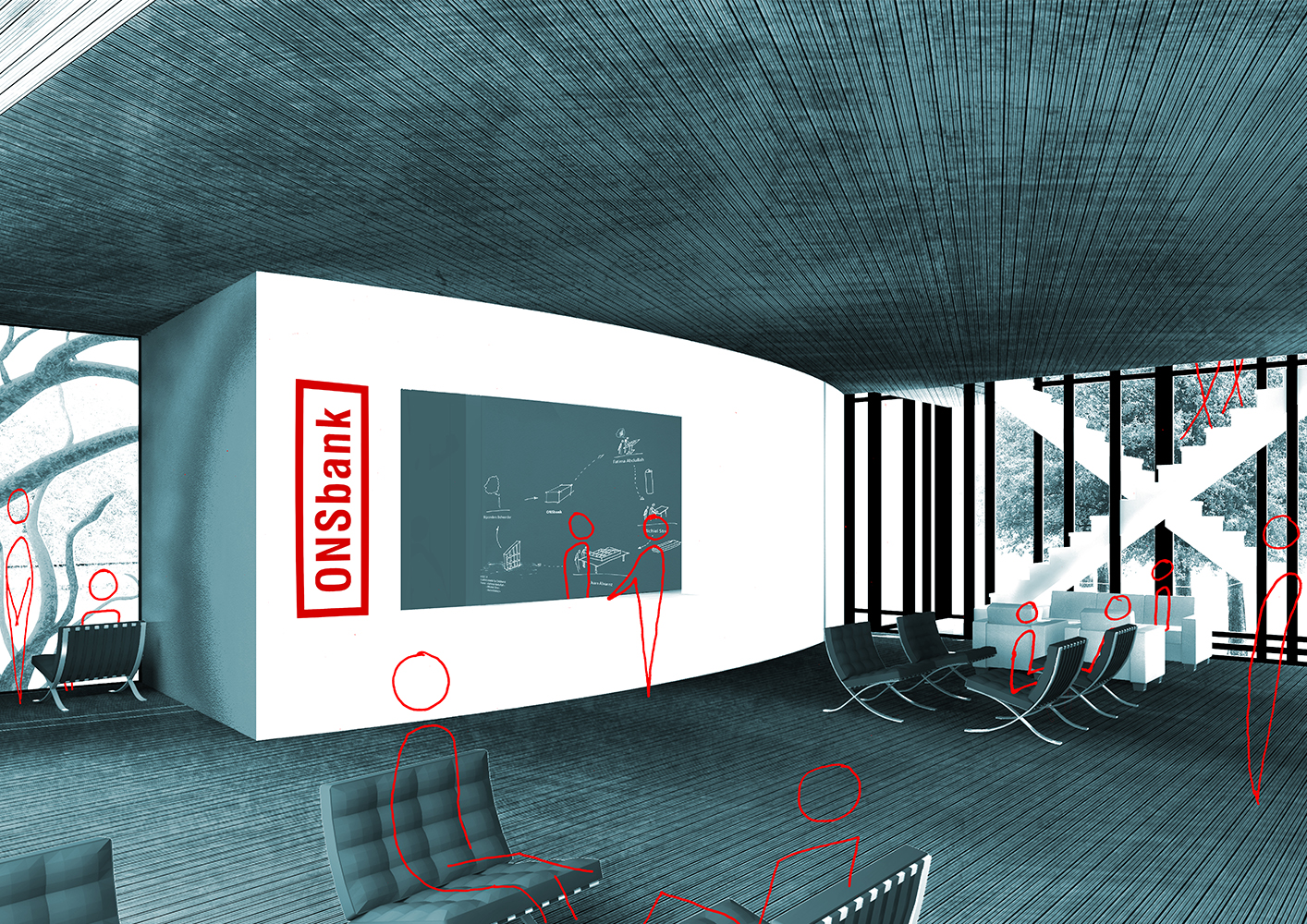 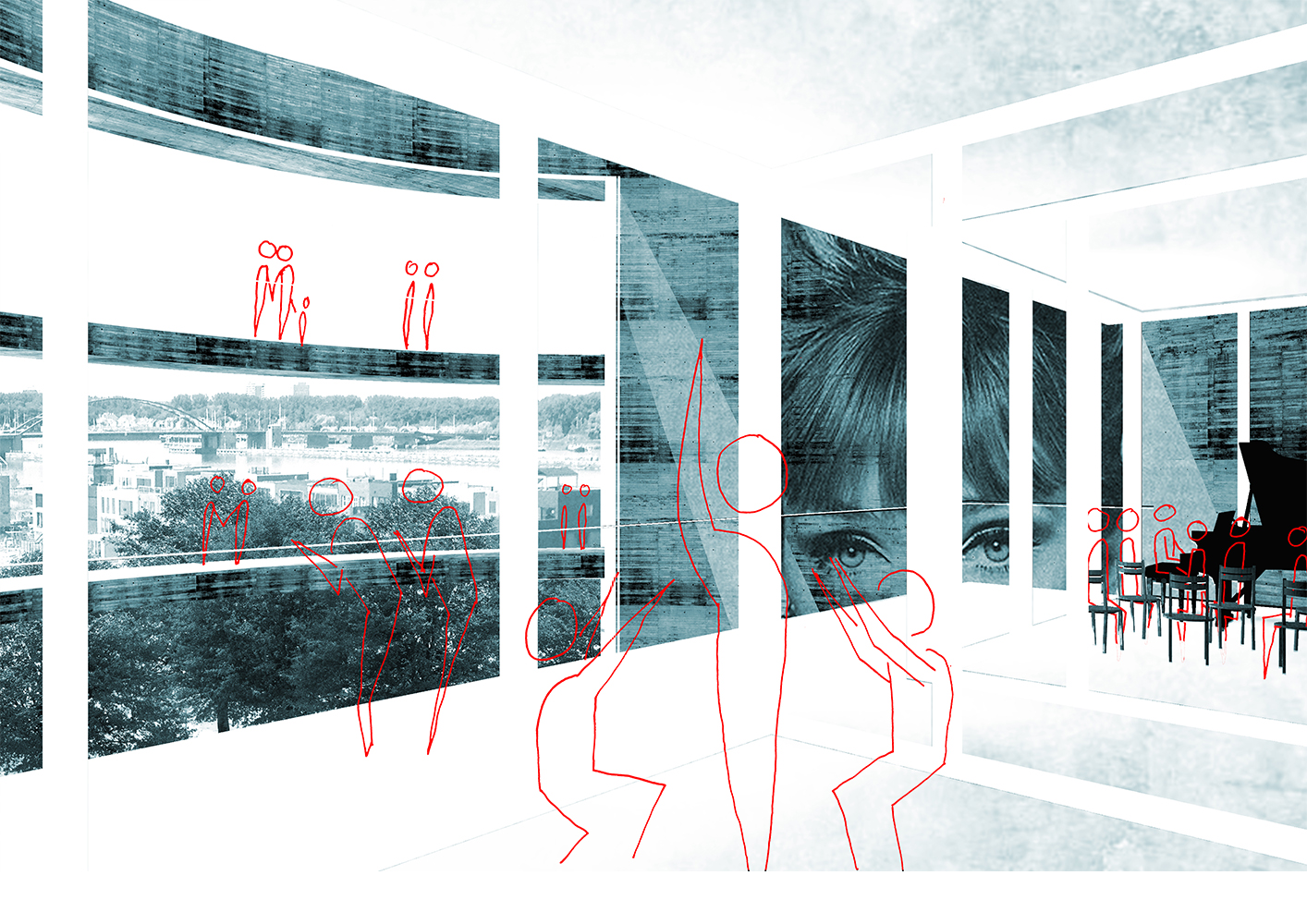 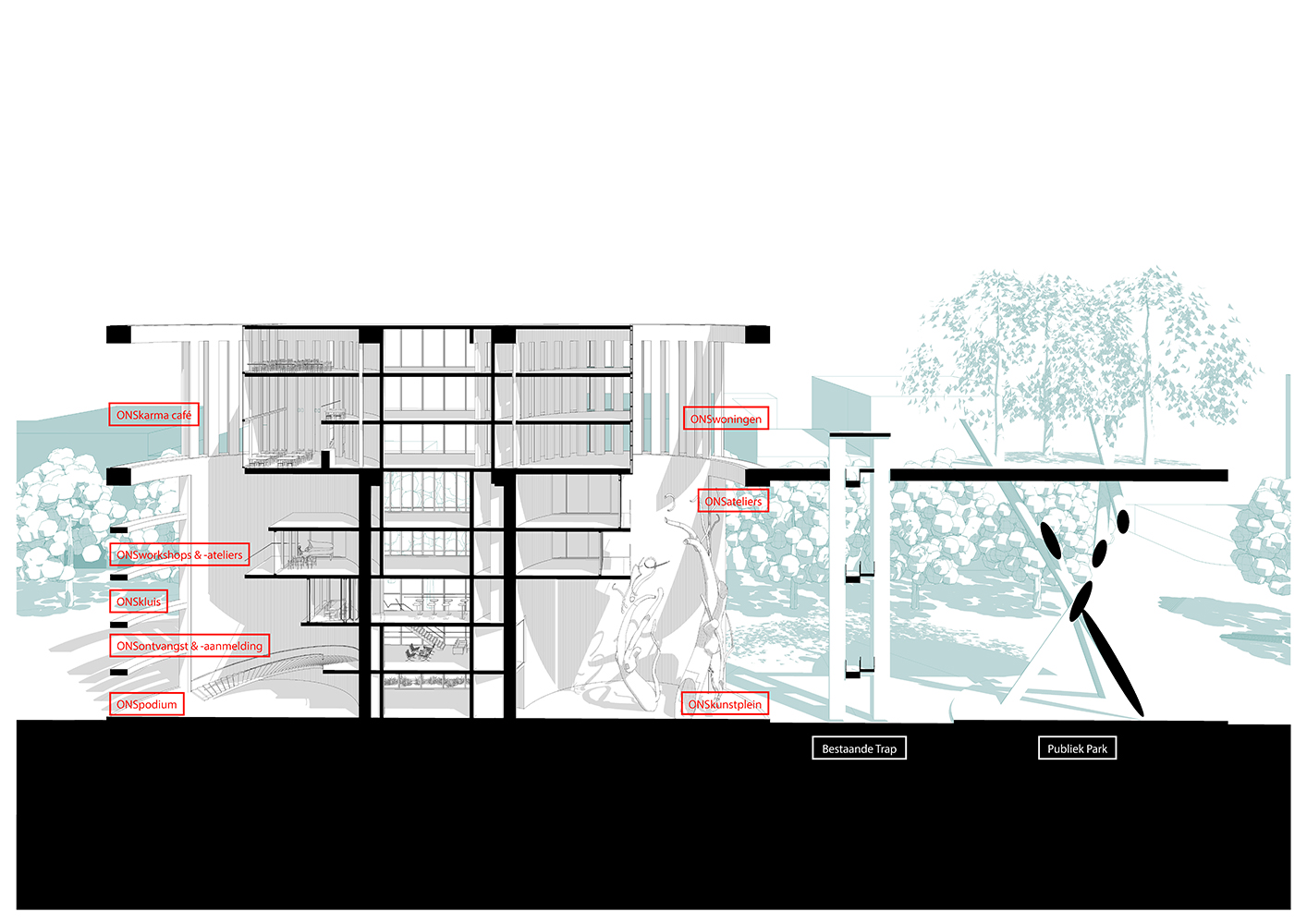 “Whose fault is it that you have debts?”

That's one of the questions people in financial debts have to answer if they want to partake in the project of ONSbank, a conceptual "bank" that helps a young generation who tries to cope with financial debt. The applicant is allowed into the program when he or she is aware that the financial debt is merely a result of his or her own actions. ONSbank brings the debtor and the creditors together to create humane conditions for the redemption of the debt. With the use of art, these young people are reeducated to be aware of their knowledge, skills, identity and context with which they can come out of the vicious circle of debts for good.

The question whose fault it is that those young people have large financial debts should also be answered by us, the society. All of us have worked to establish a system that stimulates to consume. Nowadays almost everyone needs to have a strong will to resist those stimulations. Just think about all those people buying a new Apple product which has no significant change when you compare it to what those people already possess.

Departing from this point of view we called our project Homo Homini Debtor. "The man is a debtor to another man". Those young people may have financial debts, but we as society have a moral debt to pay for setting up the perfect context for superfluous consumption that put these people in this position.

This project started when ONSbank was trying to proof their concept through a pilot with 7 participants. The idea was to bring these people together with the creditors and create the circusmatances in which these people could pay off their debts. We suggested a system in which scale bears great importance. To involve the public into this concept, we saw ONSbank as a "bank" that truly could give the investor a return on the investment. In this way ONSbank could also dictate its own terms in the aid to get the youth out of trouble instead of depending on the mercy of the creditors.

The system works as follows: With the investment of the public, a pile of money can be created to pay off the debts of the participants. These debts are always more than the original debt when a person is accepted for ONSbank. For example a particpant has a debt of €100,-. The original debt is €20,-. This is topped up with €70,- "administration costs". We suggest ONSbank to make a deal with the creditors to "buy" the debt for the original price of €20,-. With this transaction ONSbank becomes the new creditor who can specify his own terms in the redemtpion of the debt by the participant. The debt that must be paid by the debtor is in this example €30,-. The €10,- margin is the return on investment for the public that has invested in the participant. 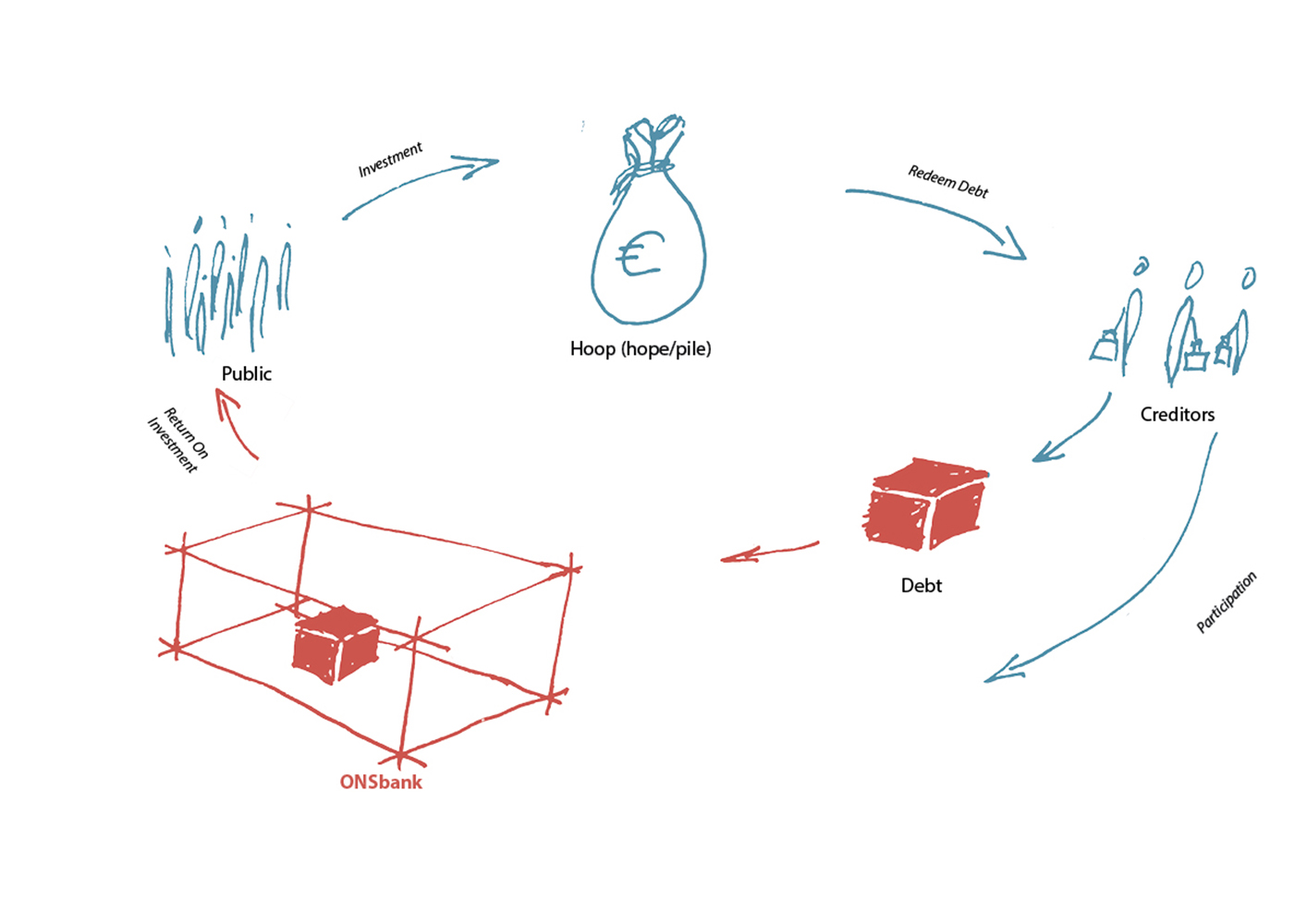 Besides providing for a financial return on investment for the public, ONSbank should also be able to educate the public about the consequences of debt. The best way to do this is to involve the public on a personal level with the process of reeducating the debtors. This can be done intwo ways: the production and the "karma cafe".

Production as an attractor

The youth in ONSbank is being reeducated with the use of art and creation. These cultural topics can be used to attract people towards an investment and towards a reallization of the impact of debt in the lives of people. The creation of art pieces, user objects, and performances can be used as an attractor. Despite the fact that these created pieces are performed or created by amateurs, exhibiting the process of the creation is also an rich topic to show and discuss amongst public. To stimulate the involvement of the public into the process, the public can buy the pieces made by the youth.

'Made by ONSbank' is the process in which the youth is being reeducated. Let's say there is a "special manager" who is interested in a closet. ONSbank puts this requests in the hands of the (fictional) participant Fatima Abdullah. With the help of the artist Fatima draws a closet for this investor. The drawings are passed on to Michiel Stro, another (fictional) participant. Helped by his mentor, Michiel prepares all the material needed for the final object. Together with his own mentor another (fictional) participant Juan Alvarez assembles the closet "KAST13" for the investor. In this way the process can generate valuable pieces 'made by ONSbank'. The income from this object can be used to finance a course in technical drawings for Fatima, since it came to light that she has a talent for this subject. In this way the participants are being supported by the public, on their way to pay off their debt and to rehabilitiate themselves into the job market.

The karma cafe is the meeting point for all the participants in this concept. It is a café that supports people who are financially challenged. The idea is that anybody who visits the café can buy cunsumption for people who cannot afford it at that moment. This concept, inspired by the old Turkish/Ottoman habbit called "askÄ±da ekmek", can make people earn "karma points", which in return can be used to get priviledges in the process of obtaining an ONSbank product or to visit an ONSbank exhibition/performance.

The location for the building that would enable the system of ONSbank was planned for Zeeburgereiland in the eastern part of Amsterdam. Strating as a military zone in the beginning of the 20th century, this island hosted a sewage treatment plant from the 1980's untill 2006. Three charecteristic Silo's are what is left of this plant. These three settling tanks became a subject of a tender in Amsterdam during this workshop.

The silo's are introverted cylindrical objects. The goal is to make these silo's a place to meet for the actors. Therefore we want to open up the silo's to activate the space inside and around these three objects. The public space on the groundfloor is the glue that connects the silo's with each other. The contents of a silo is meant as an enrichment of the public space. One of the silo's is designed to be used as a public park in the hight. The actual functions of the building with the workshops is situated in betwee the silo's. For the financial picture the silo's are also being topped up with three layers of residential spaces.

The main intervention are the cuttings. This opens up the possibility to use the impressive hight of the silo's as a shared space. The ground floor of the complex is the public space that can be used for performances and art exhibitions. This level gives access to all the functions inside the building.

The first silo has a great staircase that can be used to reach the entrance of ONSbank of as a tribune to watch some of the ONSbank performances. The middle Silo is the silo provides for a space for the art of the voluntering mentors in the ONSbank project. This silo also houses the ateliers of these artists on the 4th floor.

The first floor untill the 3th floor are reserved for ONSbank. The first floor is the audition & application space where the actors in the ONSbank project are being received.

The second floor is the safe room. This space is used for intakes conversations and receptions. This is the level where ONSbank decides whether to accept the applicant and put his/her debt into the safe.

The third floor is the level where the applicants can create. Like the other aforementioned floors also this floor is flexible. Rooms can be joined and separeted to provide the needed space for different workshops.

The extention on top of the original silo's are consisting out of the ONSkarma cafe and the residences for the locals and the visiting artists. These floors can be reached independently form ONSbank.

The inner walls of the silo's are being used as a canvas for ONSbank to show the processes of its participants.The silo's have a walkabout on every level. The contents of the silo's and the context around the silo's can be observed from these observation lines.